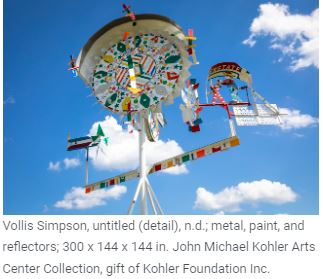 In the mid-1980s, retired repairman Vollis Simpson (1919–2013) began using his collection of old farm equipment to construct monumental whirligigs in the fields around his Lucama, North Carolina, home. The site became a tourist attraction, enticing visitors to his rural property. In 2010, the nearby town of Wilson announced a plan to work with Simpson to move, restore, and reinstall thirty of the sculptures in a new park in its unpopulated downtown district. Kohler Foundation, Inc., joined the project in 2016.  After the restoration, the Arts Center was the recipient of several Simpson works, including the large piece installed in front of the Art Preserve. Since the park’s opening, Wilson has experienced a revitalization, with over $3 million annually brought in by associated tourism.

This spotlight features the work of several photographers, including Larry Harris, and documents the evolution of Simpson’s whirligigs from a private passion to a source of communal pride and benefit